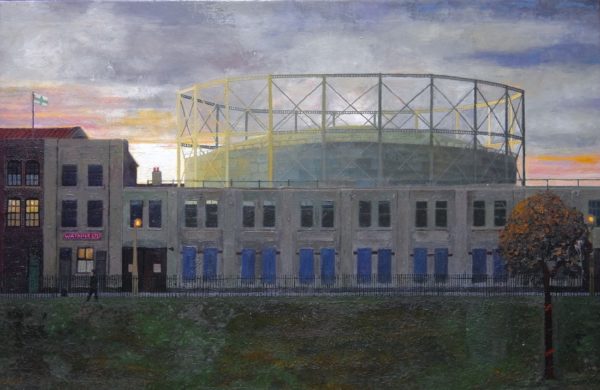 Living close to Peri at the same period was Doreen Fletcher. In fact, they knew each other as both were part of the same community of artists in the 80s although their work and whole approach to it was very different. Neither were born East Enders and whereas Peri seems to have taken a while to respond to it emotionally as a subject, Doreen knew when she arrived that she had to paint these dilapidated streets that were under threat before it was too late.

Mile End Park at Twilight was painted in 1983, shortly after Doreen’s arrival in the East End and the gasometer looms over the terrace in Cooperfield Road, illustrating the fading dominance of industry in the East End. It was the target of many bombing raids during the war and its position in the midst of the maze of little streets caused terrible bomb damage, which eventually led to the plans to re-develop the area long after the war. Here the terrace sits, awaiting its fate, shuttered and secured to prevent squatters and vandals.

Doreen is an optimist at heart though: she could have shown the buildings derelict as we saw in Peri Parkes’ painting and the palette could have been much gloomier. Instead Doreen has chosen to paint the scene at sunset, with a glorious multi coloured sky and a hopeful burst of light in the distance. And although we don’t see them, we sense there are still people inside: windows are lit and the street lights are shining, negating the effect of the dark and shuttered terrace.

The second of Doreen’s paintings I hung always looks like an 18th century painting of a Suffolk village by a young Thomas Gainsborough to me, although I suppose if you look closely the Tandoori Curry shop sign is a bit of a giveaway. It’s definitely not a typical East End painting though: no run-down buildings here, these are painted in cheerful colours, well kept, with pretty windows and a nice area of neatly mown grass in front. This is Mile End Park with Church from 1988 and although I hung it in chronological order in the gallery I’m going to return to it in the next post…. 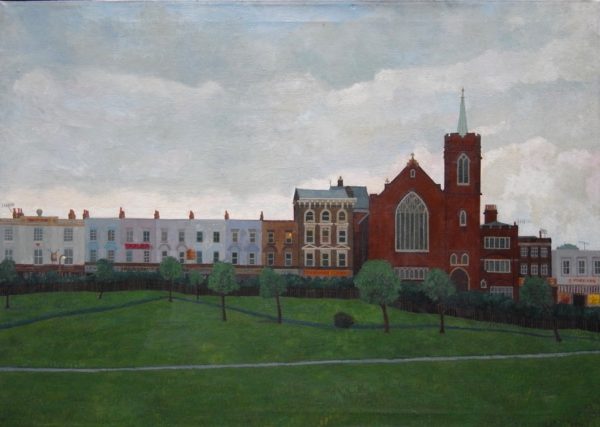 A short video of the exhibition is available to view on YouTube:-