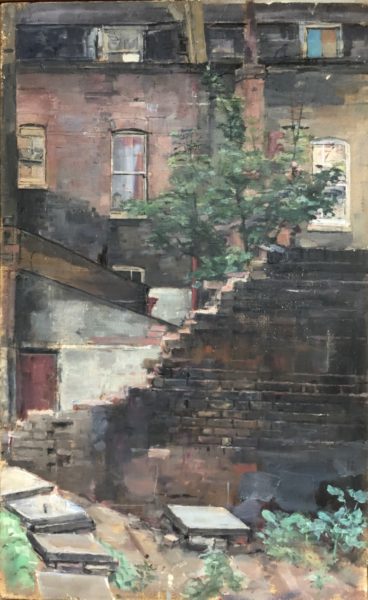 Unlike John Allin and Rose Henriques, the next artist, Peri Parkes, had trained at the Slade and moved to the East End after the break-up of his marriage: a friend was living there and Peri, trying to make his way as an artist, couldn’t afford anywhere else. This is one of a series of paintings executed when he was living in that prefab in Conder Street, Limehouse and dates to around 1982.

It’s another ‘backs of houses’ and is the fourth in Peri’s sequence of the street. Earlier on in the series the emphasis is on the rigorous measuring technique which he’d been taught at the Slade, the subject is just what’s available to him out of his window. But gradually you can see him being drawn in emotionally and he becomes fixated on the wall in the foreground that gradually disintegrates from one painting to another and a patch of moss that was cleaned off it. He wrote: ‘at the very beginning there was a rich snakeskin pattern of moss down the wall, one day it was scraped away, nonetheless I have determined that its absence remains the main focus of the painting’. For him these paintings become an allegory of the passage of time and so there is an air of forlorn dereliction to the painting without the signs of life in Walter Steggles’ painting even though the subject is similar. There’s just a faint air of decay and emptiness.

Except when I hung it in the gallery, I noticed something I’d never spotted before in this: the very faint head of a child looking out of the window, which is now the first figure to appear in one of Peri’s paintings. From this point on the East End becomes more than just whatever’s outside his window for Peri, it starts to get under his skin and the buildings with rubble outside that had been derelict and lifeless in his work, start to become inhabited and take on a life of their own

For a short video of the whole exhibition see the link below:-