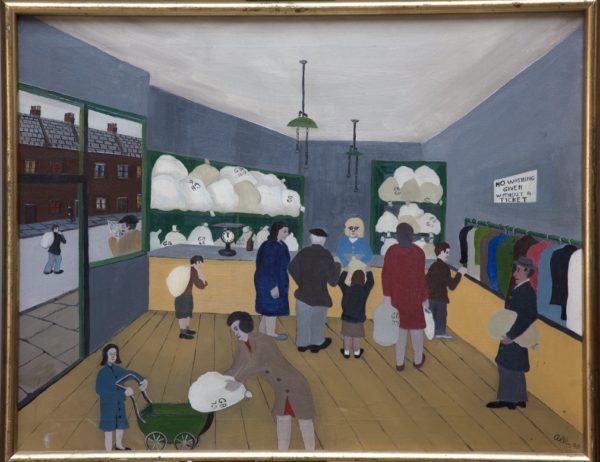 While Rose Henriques paints her local community, and her people are faceless parts of a larger whole, the characters in John Allin’s work are real: his people are characters we feel we’ve met. He was the only artist of the six here, who was born in the East End in 1934 and so he spent his childhood and teenage years there through the war until the 50s. It was in his blood and whereas Rose Henriques did something practical in response to the grinding poverty she saw around her, John Allin was a more political animal and sometimes it creeps into his art, particularly early on.

The Launderette from 1968 depicts the one over which he lived at the time in Hackney.  It’s a large work with bright colours and was painted using ordinary house paint, which he used early on in his career. It’s an attractive scene, but what about the faces? I hadn’t noticed before that none of them are smiling, although maybe the lady in blue might have a half-smile. Look at the man on the right and the small boy with the laundry sack, their figures are slightly bowed and downtrodden, like the people trudging along the street outside. And the lady behind the counter is definitely ready to go home after a hard day! But I like it, he’s portraying what he sees, but it’s more than a record, it’s also what he feels and hasn’t descended into the rather more commercial nature of some of his later work, once he’d achieved success and fame.

You can see a bit of this in the next one, which is slightly more formulaic and was painted about 6 years later in 1974. But what a wonderful image of East End shops, every item on sale carefully and lovingly drawn. Incidentally these shops were in Hessel Street, the same street as Rose Henriques’ market painting, but over 35 years later, after the market had gone. His affection for these little shops is almost palpable. 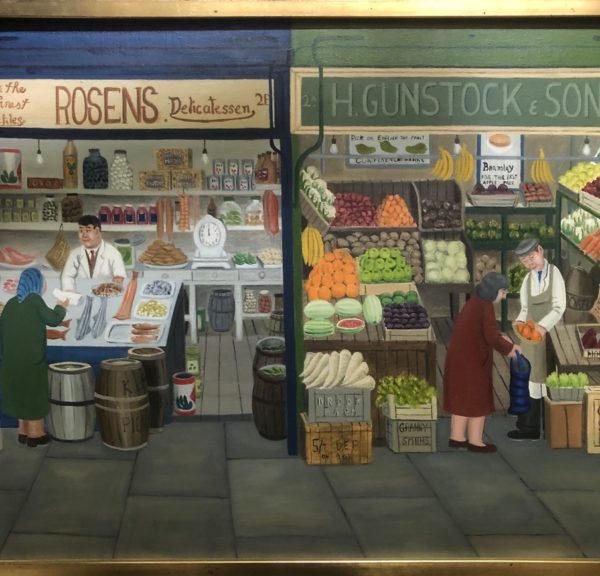