The next two paintings I hung in the gallery during lockdown are completely different. They’re by Rose Henriques, who lived in Whitechapel and who painted these just a few years after the Walter Steggles in the previous post. She and her husband Basil lived in Berner Street and made such a large contribution to the local community over the years, that the street was later renamed after them. They moved there in 1930 and the first painting is of the small court behind the main building. It’s called Our Court, from 1933 and shows the three cottages that they demolished that same year to build flats as accommodation for local people. She was self taught as an artist and her choice to record this court just before it disappeared suggests that her desire to make a record of the area around her was her motivation for starting to paint.

The court had probably changed very little over the 120 years it had been there and the way of life of the people you see in it here, had probably changed very little too. It’s one of those tiny East End courts that we all love to see in photographs, a bit like the Walter Steggles backs of houses, it’s like seeing what’s going on behind the scenes – something we don’t usually get the chance to see. But in this one there are people: two women, or a woman and a child maybe, washing celery and a costermonger with his barrow who’s come around with something to sell to a man waiting. It’s difficult to work out what it is. The barrow is unusual and seems to have a sink, is he washing something, perhaps fish? Preparing oysters? And the women outside their doors with their children: these are lives led on the streets, for all to see and definitely not behind closed doors. Gone are the empty streets of the East London Group, these are teeming with life.

Look at the next painting by Rose, called Upper and Lower Market: also from the 30s, it’s of Hessel Street market. It was re-developed in the 50s and the market was swept away, but here it’s thronging with people: market traders, someone carrying a sack on his back, children, babies in prams, stiff-tailed dogs sniffing each other, policemen chatting and someone with a tray selling ribbons maybe, who looks as though he’s walked straight out of a 19th century edition of Cries of London. This could just as easily be street life 1880 as 1930. 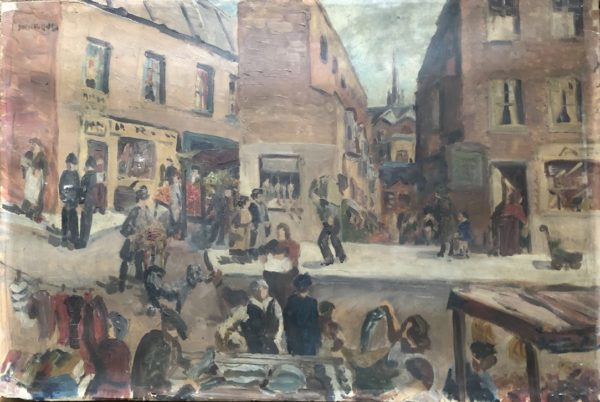