As I sit here in the shop in the cold waiting for the snow to arrive Robert Sayer’s engraving of skaters in January seemed appropriate.

The figures in this are very appealing: the bulk of the figures are around the fire, so bundled up that they can hardly move in contrast to the lightly clad figures on the ice, keeping warm through exercise. But perhaps he is also illustrating the folly of youth in its refusal to dress up warmly. I am not a print dealer, but from the research I have done into Robert Sayer, these figures seem to be typical. Slightly elongated limbs, with quite distinctive faces and a sparse approach to the landscape setting which has a very linear/graphic feel to it. The lines underneath read:

‘The old ones, round the fire give sage advice,

And cry ‘tis dang’rous skaiting on the Ice’,

But Fribble heeds not what old people say

Because he thinks he’s got more wit than they.’

‘Fribble’ means a coxcomb or dandy and I assume that’s the figure being pushed in the chair on the ice as he looks rather elegantly dressed. Apparently David Garrick played a character of the same name in a play, which fits with a date of mid eighteenth century for this set of prints. 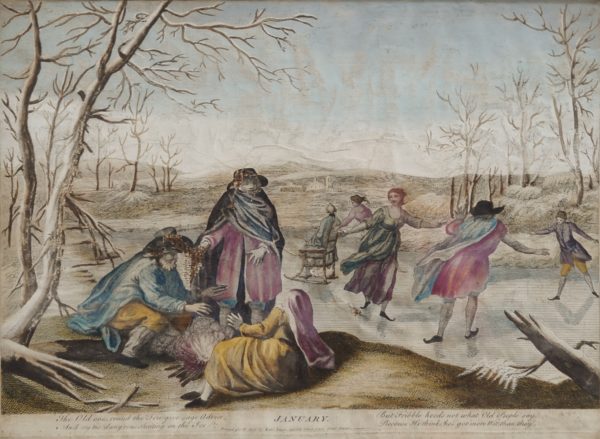