This pen and ink drawing by the east end artist Madge Gill will be in ‘The Mind of the Artist’ on show at Town House 14th – 30th November. She received no formal training, but nearly a hundred years after she started painting Madge Gill’s work remains very popular. It almost always features the same female face with varying expressions and dark staring eyes, which she called  ‘Myrninerest’ (My Inner Rest), but that face seems to strike a chord within us.

Madge had a difficult early family life: she was born in Marsh Street Walthamstow in 1882 to Emma Eades – the name of her father is unknown and in 1891 she was taken into care by Dr Barnardo’s at Barkingside and then sent to Canada in 1896 to work on farms and as a domestic servant.  She returned to England in 1900 at the age of 19 and worked as a nurse at Whipps Cross Hospital, living with her aunt nearby.

In 1906 she had her first son with Tom Gill her cousin, whom she married in 1907 and over the next ten years she had two more sons. Tragedy struck in 1918 when her second son died age eight of Spanish flu and then in 1919 she gave birth to her daughter, who was stillborn. Madge was seriously ill for many months afterwards and was left blind in one eye. Her aunt had introduced her to spiritualism and astrology and while she was recovering she began her extraordinarily intricate drawings guided by her spirit guide.

In the obsessive pattern making, which covers the surface of the paper, Madge seems to want to immerse herself totally in the process of following the line to the exclusion of everything else.  She first exhibited with the East End Academy at the Whitechapel Gallery in 1932 and became one of the most popular artists in the annual exhibition, showing every year until 1947. This work probably dates to around that time. 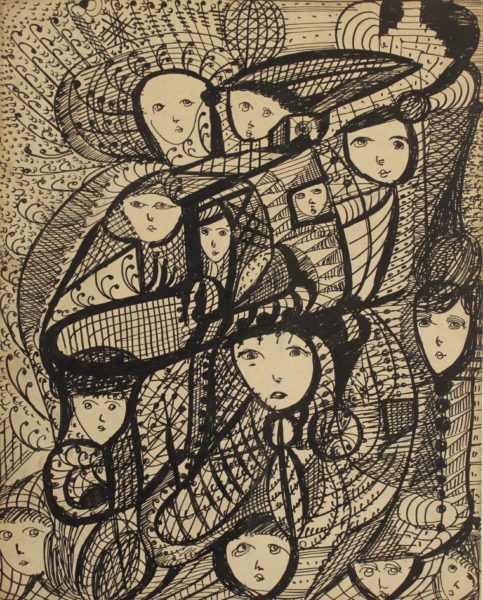