I set off early on Wednesday morning: up at 5am in France (4am as far as I was concerned), to go with friends to the ‘brocante’ at Le Mans. I hadn’t been to it for a long while– it’s not much fun going on your own, struggling up at that time of the morning, driving for an hour and a half and then fighting for a parking space in the middle of a muddy field, so I was looking forward to going with the others. Of course once we arrived and had a quick cup of espresso to warm up, it was down to work and then you’re on your own: unspoken etiquette demands that you separate and go your own way to avoid the difficulties of everyone wanting the same thing. So it’s first come first served until the initial rush is over and then everyone meets up for another coffee and to compare notes.

I’m told that I’m very fussy about what I buy…. and there were lots of attractive things which, on the whole, weren’t as outrageously priced as I had expected. But it always has to be something I love for one reason or another and this dish from Provence was one of them. Partly it is the shape: I have two plates in the shop at the moment with the same glaze, so I was pleased to find a serving dish. Then there is the colour: such a suggestion of summer warmth against which any food would look good. But one food sprang to mind as soon as I saw it – asparagus. It’s not only that English asparagus is delicious, but the fact that it is only around for such a short time heightens my anticipation. And it is soon followed by broad beans, peas and all the other harbingers of summer. More than anything else though, it is the fact that asparagus would look perfect against the warm yellow of this glaze. 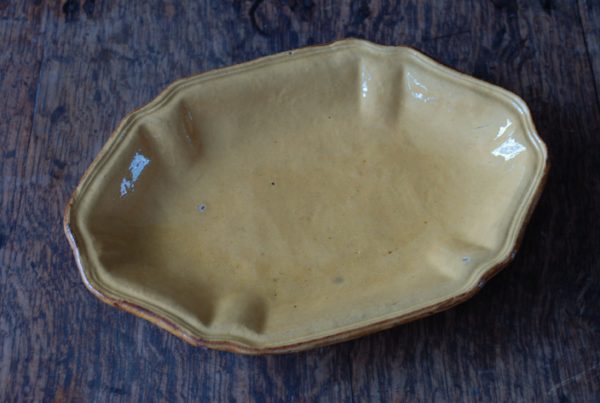