I had an unexpected treat when I visited Anthony Eyton to collect the paintings and drawings which are going to be included in Now and Then, an exhibition of current figurative artists living and working in the East End opening here on the 28th November. Anthony is no longer living in Spitalfields, but he had a studio in Hanbury Street at the end of the 60’s, when he was drawn to Spitalfields and Whitechapel by the noise, colour and vibrancy of the area.

He had managed to get most of the paintings together, but was still unable to find a couple, so that meant a lot of rummaging through stacked up paintings, looking for the elusive ones. Nothing nicer I think, because of course we discussed the paintings we came across as we searched, in a much more companionable way than you’d expect given that I hadn’t met him before.  We were drawn together for the time being by the magic of seeing old friends for him, and the magic of seeing the many facets of his work for the first time for me.

This painting, from his studio in Hanbury Street in 1981, encapsulates for me his view of the East End at the time. No sky, just an overwhelming sense of buildings one after the other, run-down, but not depressing.  A sense of lives lived on top of each other, but where someone has made a tiny patch of green amongst the endless brick.  His is a gaze of great fondness for the city and although his paintings in the exhibition are mainly about the buildings, you sense a great love of life at the heart of them all. 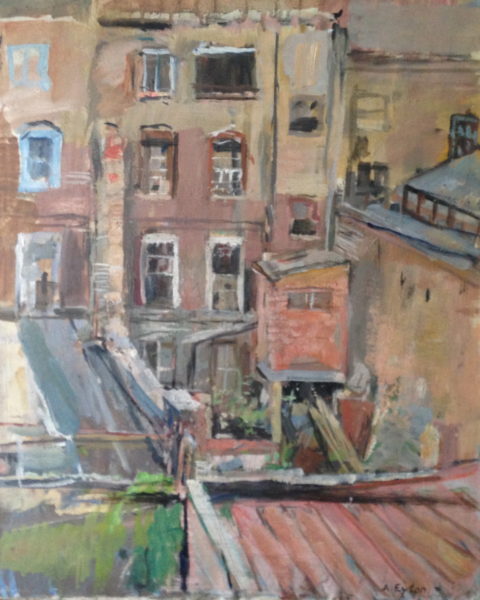