A woman sits alone at her work, head slightly bent, absorbed in what she is doing. Not an uncommon theme in twentieth century art and literature, but this watercolour dates from just before the middle of the nineteenth century, when ordinary women in their domestic surroundings were usually to be found as tokens of hard work and drudgery in genre paintings depicting the toils of the working class. In these paintings it was the woman’s surroundings that were important: the sparsely furnished cottage with its fire, cooking pot and perhaps children – all symbols of the inescapable purpose of her life.

This painting is unusual as the women is centre stage for her own sake, the surroundings are almost irrelevant and the affection and familiarity of the painter’s gaze suggests that this was probably painted by someone close to her. Perhaps it was her daughter, practising the painting that would have been part of her education in a ‘middling sort’ of household and as she looked at her mother she would surely have thought of her life to come.

If so, she does not seem to have been unhappy about it as the painting is full of a sense of a quiet contentment. The woman seems to be enjoying her work and she can turn her gaze out of the window to the world beyond, hinting at a life of contemplation. ‘A woman and her thoughts’ or soul was to become a favourite theme for artists around the turn of the twentieth century as attitudes to the position of woman in society began the long, slow process of change.  This watercolour that at first glance appears to be on a familiar theme, is in fact a quiet reminder that attitudes only begin to change in a small, unconscious way and take a long while to be perceptible on the larger stage. 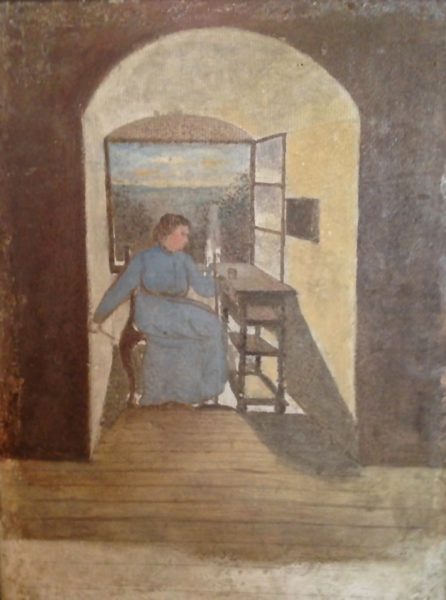