My email box is unusually exciting at the moment as I’m being sent lots of images by the artists taking part in the new East London Group exhibition ‘Now and Then’ at Town House from 28th November – 8th December. The exhibition sets a group of six artists living and working in the East End now alongside some works of the original East London Group from the 1930’s and some works by Anthony Eyton working in the area from the 1960’s.

I love this etching of a mudlark and his dog, which arrived from Joanna Moore recently. At first it was the visual appeal of the sketching and the rapid strokes that convey the repetitive movement of man and dog as they search for ‘treasure’, almost resolving into a pattern. Yet it soon reminded me of an article I read recently about the artist Simon Ling, shortly to appear in an exhibition at the Tate, who also likes to work outside and whose intense focus is such that a detail becomes everything. I realised that Joanna is doing something similar in this etching, but focusing on the event rather than the object.

The etching comprises a series of sketches made as Joanna watched the mudlark and his dog, but by combining it into one image the event is analysed over a period of time so that we can view it from every angle. Not only does it convey the closely focused, minutely choreographed movement of the mudlark as he works, but we also understand the close relationship between man and dog much better than we would from a single sketch. 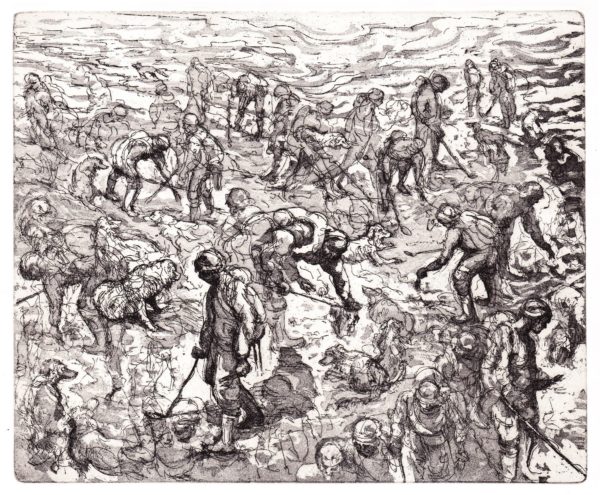