This is a cabinet of curiosities that isn’t. It is a bookcase into which I placed some smaller items of stock when I was moving things around for the arrival of the coffee machine earlier this year. Small objects, more self-consciously curiosities, had been in it previously and sold, but this time I was in a hurry and in need of somewhere to put things. So instead of selecting and arranging carefully I just put the things in: all have been moved around several times for various reasons, each time in a hurry. Yet the odd thing is that it doesn’t seem to make a difference to how people view the cabinet, mostly finding it fascinating, which has made me wonder why.

Placing the objects in a cabinet seems to take them out of context and makes us look at them in a new way, as though in a museum. There are some animal or mineral curiosities in there, but most are man-made and when I look at the photograph many are, to our modern eyes, slightly curious: a tea brick made for transport by sea, a pocket globe for carrying around, an unusual money box or a snuff box. Rather than being curiosities of a strange new world these are curious because they belong to a past world that is completely unfamiliar, rather like looking at an old faded photograph that initially looks recognisable and then being surprised at how much has changed.

In the past these cabinets were created to display to their audience wondrous man-made or natural objects of a world that was still being discovered. Now, perhaps, the wonder in looking at this lies in how much we have changed. 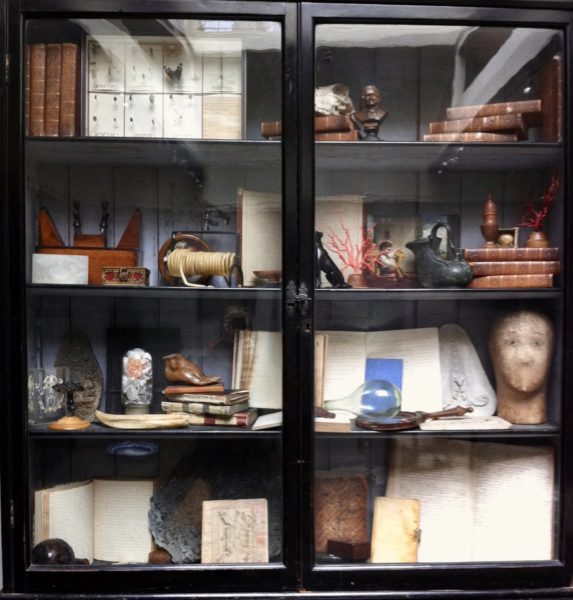