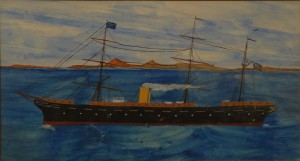 I bought this painting of a ship the other day, partly because I always respond to naive art and partly because of the glorious blue. But it puzzles me, because it’s one of those paintings where there has to be a connection between artist and subject. Of course there are many artists who just paint in a naive style, but they don’t usually paint things to which they have no connection and there are many ship portraits, but they are usually much more sophisticated. So I googled the name potosi inscribed faintly on it and discovered that this was indeed a ship: she was built in 1895 and had a black hull and was red below the water line, which fits. But she also had five masts, whereas this ship has three masts and two funnels, but despite that somehow she looks like the Potosi in the Wikipedia photograph. Then from nowhere came a memory of the CS (cable ship) John W McKay, which used to be moored in Greenwich off the Standard Telephones and Cables site, where I was a project manager for submarine telephone systems once upon a time. She was built in 1922 and one day I was given a tour of this beautiful ship, still with her wonderful 1920’s wood and brass interior. For some reason one of the things I remember most clearly is my guide telling me that funnels on ships in the 1920’s slope slightly backwards. So I think that this little portrait is of the Potosi from the 1920’s when she must have been modernised by the removal of some masts and the addition of two funnels. And here is someone associated with the ship recording that change for us to see now……. so this is what antique dealers do: find the stories and make the connections.