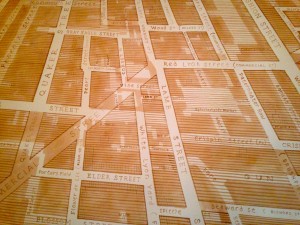 I can’t believe it’s already a year since the Huguenots Festival and the launch of the Huguenots of Spitalfields charity. It was an amazing couple of weeks: so many people coming in who’d never visited the area before, but fascinated by it all and very keen to share their family history. I know the feeling: we discovered a couple of years after I opened the shop here in Fournier Street, that my husband’s ancestors had lived at number 29 in the 18th century and were married in the church opposite in 1756 – an extraordinary coincidence!

I had the idea last year of a Huguenot family history map of the area, but too late to organise it. However, this year I have and Adam Dant has drawn a very large map of the Spitalfields area extending from Bell Lane in the south to Calvert Avenue in the north and from Norton Folgate/Bishopsgate in the west to Brick Lane in the east. From 1st July to 31st August this year the map will fill the back wall of the gallery at Town House. We’re asking anyone who has details of their 18th and 19th century family who lived in the are (dates, names and addresses), either to come in and put the details on the map or email us on fiona@townhousewindow.com and we’ll do it for you.
We’ll also have a very large blank piece of paper on another wall, which will be a ‘message-board’ for anyone seeking further information about their family members.

We need as many people as possible to come and take part so that we can build a good family history map of the area and if we get enough families then we’ll get it printed for sale and give the original to the Bishopsgate for their archives. So come and see us in the summer and put your family on the map!