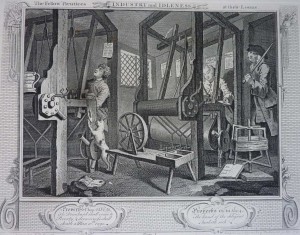 Until about 1830 Fournier Street in Spitalfields was called Church Street and in a spare moment last year I googled my address as it was then: 30 Church Street. To my surprise a result from a trade directory was first on the list, referring to Richard Ball, weaver, living here in 1794, and a resident of the building previously unknown to me. Unable to find any further information on him, I filed it away as another piece in the jigsaw of who has lived here for the past three centuries.

In an extraordinary coincidence a few months later I picked up a second-hand copy of ‘Life and Death in Spitalfields 1700 to 1850’ written about the excavation of the crypt in Christ Church and published in 1996. One of the vaults examined was the Ball family, specifically Mary and Martha who died in 1819 and 1821, aged 47 and 70 respectively – but no Richard. I assume, however, that these were his wife and daughter. I have since discovered that Richard Ball seems to have been in partnership with Stephen Sorel, forming the firm Sorel and Ball, weavers and silk merchants of Church Street, which was active c1770 – 1790.

So I am very much looking forward to the talk taking place on the 16th April in Christ Church on these excavations, part of the Huguenots of Spitalfields festival (8th – 21st April). Not that I think the Ball family will feature, but I’ll know a bit more about their lives in Spitalfields as I imagine them weaving in the attic here. The photo is one of the plates from Hogarth’s Industry and Idleness, 1746 and shows weavers with their tall looms, the cut-out for which was found during the work that took place here ten years ago and which survives to this day in the attic ceiling.