When Zero Lubin first suggested their exhibition ‘I Want to Make Memories With You’ and showed me some of the amazing silk handkerchiefs in their collection it instantly took me back to my childhood and the pile of hankies that sat in my drawer. The more boring ones were used, but the others, which I liked most, were kept and occasionally used as dolls’ tablecloths or scarves – I think they are probably still sitting in a drawer somewhere at the moment – I have never quite been able to get rid of them.

Now they seem like something from a lost age of innocence, a memory of my childhood that my children probably wouldn’t understand, as I don’t think handkerchiefs have been given as presents in the same way for a long while. But where would we be in books and old films without hankies: being handed a tissue to wipe away the tears is just not the same!

Zero Lubin’s hankies have a modern twist though, who can resist the added ‘Dress Like a 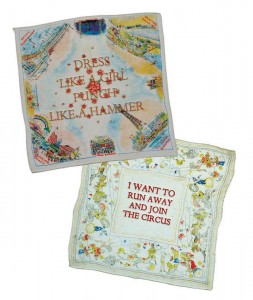 Girl, Punch Like a Hammer’ or ‘I Want to Run Away and Join the Circus’ – definitely not sentiments that would have been thought suitable to be given to me all those years ago. And the exhibition here, in a building, which was used for much of its early life by weavers, seems particularly poignant.  The handkerchiefs were primarily made in Macclesfield, a town that benefited from the industrialization of weaving which ended that trade  here in Spitalfields.