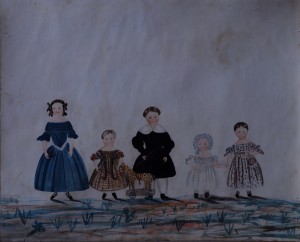 I couldn’t resist this watercolour when I saw it: there is something incredibly appealing about the five of them standing there in a row, waiting for their portrait to be painted (I imagine they probably didn’t stand still for long), and feeling very important and special as children do even now when they are waiting for their photograph to be taken. You can just imagine the youngest one needing to have her hand held and them all wanting the toy horse to be included, except perhaps the oldest, who looks as though she may want to distance herself ever so slightly from it all. Whoever owned this was as proud, because the vivid colours suggest that it has been carefully put away for much of its life. Sometimes you find inscriptions on the back of paintings of children recording their names and ages and, although there is nothing on this, the image is so strong that you get a real sense of this family without needing to know anything else about them.
For me this is the power of ‘naive’ art, the very immediate connection with ordinary people who wanted to record something in their lives that was very special, whether children, dogs or farm animals. This was not meant to be high art, but were paintings done by journeymen artists as records of people’s lives until this gradually died out during the 19th century, to be replaced by photography. If you think of those early photographs of Victorian men and women standing stiff and straight before the camera it’s the same: everyone likes to feel special.