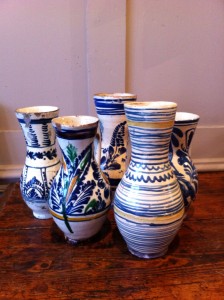 I bought these 19th century wine cups from Hungary recently, attracted by the wonderful patterns and colours and by the obvious years of use. I always fall for blue and yellow and especially stripes. One has been so cherished that the words ‘ restored in 1963’ have been carefully written on the base and I have visions of this being handed down, father to son as a family heirloom – apparently they are still treasured today. It makes me think of the inns and smaller drinking places that form such a colourful part of the long lost world of Patrick Leigh Fermor’s extraordinary travelogue that captivated me last year, a world of rural life that probably ended each day with one of these in the hand.