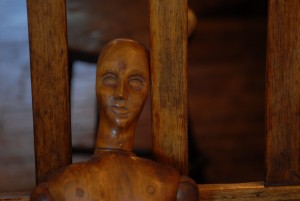 Some of the things I buy have a real sense of personality about them, but none more so than lay figures. The faces help of course, although these are often very rudimentary, but in general I think the sense of a person stems more from the very human postures. This one is different however, as it has an extraordinarily individual face that must date the figure to the early 20th century and the height of Modigliani’s fame and influence. As in many paintings and sculptures the maker, whether consciously or not, has created a face that corresponds perfectly to the period in which he or she lives. Think of the rather cipher like faces of early portraiture, the heavy cheeks of the Baroque, the solid reality of Georgian gentleman and the sentimentality of Victorian women and children. Usually each era has its own facial and body type that is considered beautiful and which is invariably reflected in the art of the time.
I was thinking about this after my visit to the Leonardo exhibition recently, because his faces must have been completely extraordinary to his contemporaries. Almost for the first time in portraiture these are real people, capable of living, breathing and feeling, no longer ciphers depicting status or some desirable quality or other. What is even more extraordinary is that in his exacting search for the perfectly beautiful face Leonardo created timeless faces that transcend the fifteenth century and remain as beautiful to us now as to his contemporaries five hundred years ago – the essence I suppose of his enduring appeal.
(To see just how human lay figures can be, have a look at the website of a New York dealer who came in to the shop recently and who specialises in lay figures: www.marion-harris.com)