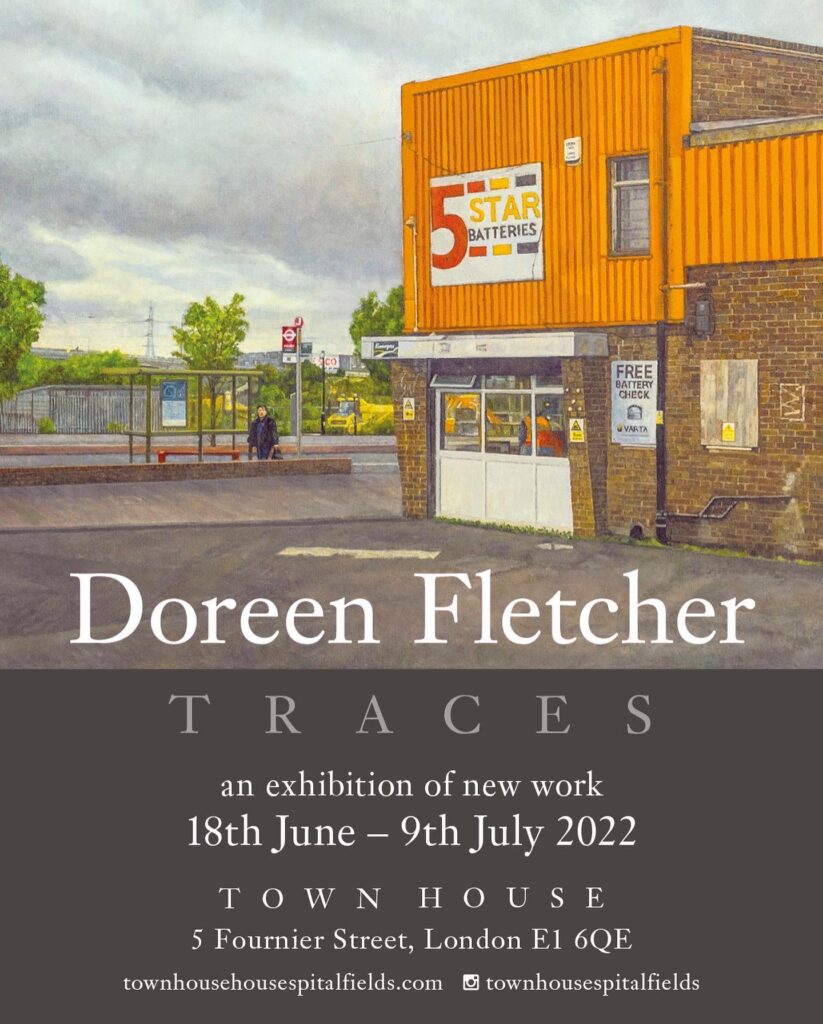 Amazingly it is six years since ‘Lost Time’, that first exhibition in the gallery here of Doreen Fletcher’s earlier paintings of the East End. In that time, there has been much wider recognition of her work: a monograph published by Spitalfields Life Books, a retrospective of her work at Bow Arts and features on radio, television and in numerous publications. Doreen’s work has caught the public imagination, capturing the cultural memory of an East End at the moment we now know it was disappearing.

Since those early days in the heart of the East End she has moved to Forest Gate and so her more recent work is of an extended East End, but her inspiration remains largely dependent on the routes she takes and what she sees as she travels, whether by public transport or by car. Doreen has never learnt to drive but sitting as a passenger on a car journey further afield allows her the time and space to look around as she travels more widely through East London. The buildings, patterns, colours and light in the passing landscape are all noted and filed away as an idea slowly forms, traced in her memory. This can be a long process and it is sometimes many years between an initial idea and a finished and dated painting.

That is somehow fitting as the slow passage of time is very important in Doreen’s work: buildings are monumental, they are built to last and although they may crumble, fade and eventually disappear, they endure. The contrast with the ephemeral marks we leave on these buildings whether graffiti, lettering or even notes is a source of constant interest to her in her work. Doreen paints the buildings that record how we have lived and how we live now, the traces of our lives in the city.

To watch the video of the exhibition click here

All works will be on the Town House website from the exhibition opening. Click on the thumbnail of a painting on the homepage, then on ‘read more’ for full information about it.